“Cuddles” was a misnomer, because the gray-and-white cat was anything but cuddly. Staffers at Capital Area Humane Society (CAHS) in Lansing, Michigan, tried time, calming medication, a hidey-hut and a blanket over his cage—but the feline attacked anyone who attempted to pet him and had to be tranquilized before vetting. An indoor cat before his owner passed away, Cuddles wasn’t a good candidate for a barn home.

Then one “really brave” foster took him home, says foster coordinator Kristen McCann, and two days later, Cuddles was actually cuddling. “We knew he wasn’t one [who] could really ever come back to a shelter,” says McCann. “He would have to be adopted out of foster care.”

With the help of a waived adoption fee, the foster used her own social network to locate an adopter and personally completed the adoption within 11 days—a happy ending that began with a shelter’s willingness to let a foster take the reins. 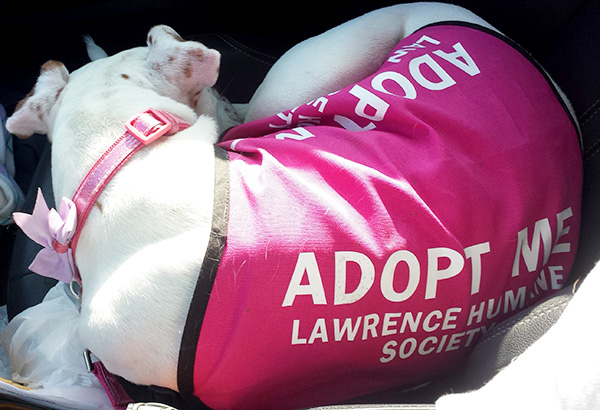 The number of people who consider adopting a pet is far greater than those who actually visit shelters and leave with a pet, according to recent data. We already know the results of such indecision: Those who don’t adopt often buy. Yet those who do adopt often adopt again. Finding those passive potential adopters is key to increased adoptions, now and in the future, but when adoptable dogs and cats are in kennels or traditional foster homes, they’re often out of sight—and out of mind.

The ASPCA’s Adoption Ambassadors program, implemented at CAHS in September 2015, empowers fosters to do more than just house animals in their homes. The program seeks to get eyes on those animals by turning fosters into “talent agents,” says B.J. Rogers, ASPCA vice president of Pro-Learning.

During both the 2015 and 2016 Adoption Ambassadors campaigns, around 750 organizations pledged to implement the program, many of them with help from ASPCA grants. Fosters at these organizations then became adoption ambassadors, taking animals outfitted with “adopt me” leashes and vests to hair salons and bars, handing out animal “business cards,” sharing animals’ bios on their own social media pages, posting foster yard signs and “adopt me” posters, meeting with adopters—and independently completing official adoption processes and post-adoption follow-ups.

The program embraces “the conversation-based adoption approach” and encourages organizations to “place trust in the members of their communities to be active partners in saving lives,” says Rogers. “Really, the foundation of the program is a trusting relationship between shelter and shelter volunteer.”

Some organizations use ambassadors for animals who need a little extra promotion, while others allow ambassadors to choose any animal for the VIP treatment. Some have only three or four ambassadors among their usual fosters, while the Louisiana SPCA (LA/SPCA) in New Orleans has around a hundred. CAHS trains ambassadors one-on-one and gives some access to its shelter software, while the LA/SPCA simply sends ambassadors home with contact information, step-by-step marketing ideas, a list of dog-friendly restaurants and adoption paperwork.

Adoption ambassadors’ animals go straight from foster home to adoptive home, meaning adopters never enter the shelter. Seeing dogs and cats out and about in the community “alters how we perceive an animal,” says Rogers. “People seem to see the dog not as a shelter animal, but as a pet, and I think that’s a really powerful distinction.”

Lifesaving in the fast lane

Of course, the idea isn’t entirely new—as Ellen Taylor, vice president and chief operating officer at the Humane Society of Washington County in Hagerstown, Maryland, will tell you. At Washington County, they’ve had a Traveling Fosters program for three years, since “before Adoption Ambassadors became a ‘thing,’” Taylor says. It’s existing programs like Traveling Fosters that inspired the folks at the ASPCA to expand, formalize and, in some cases, help finance similar programs.

In the summer of 2010, the LA/SPCA competed in the ASPCA Rachael Ray $100K Challenge, a contest that challenges shelters and rescues to achieve personal adoption records. Frustrated that black Lab mix Tulip was lingering at the shelter, former foster coordinator Meg Allison outfitted the dog in an “adopt me” vest and walked her on the streets of New Orleans. Within days, Tulip had a new home. And so the precursor to Adoption Ambassadors—Fast Track Fosters, as it’s still known at LA/SPCA—was born. Since then, over 900 animals have been placed through the program.

“It was just one of many different ideas that we put into place that summer,” says foster coordinator Allie Mayer, but it was the most effective.

When the ASPCA learned of Fast Track Fosters, the organization partnered with the LA/SPCA and Charleston Animal Society in South Carolina to research the program. The results were too promising to ignore.

From 2010 to 2011, of those who adopted from an adoption ambassador, 70 percent had never adopted before, compared to 48 percent of those who adopted from shelters. Of ambassador adoptions, only 2 percent resulted in a return, compared to 12 percent of shelter adoptions. Since then, increasing evidence from hundreds of organizations shows that adoption ambassadors are able to tap into new adopter audiences—and achieve more successful results.

That’s probably because adoption ambassadors know the animals so well and they’re able to invest more time in meeting and following up with adopters, says Mayer. All that chatting does mean animals in the program tend to stick around longer, but “that’s not a particular cause for concern,” says Rogers. “These animals are in homes.” Plus, the animals are returned at lower rates.

“When our foster homes know these animals and can answer all the questions on the spot, it just helps to create a little bit better match,” says McCann. “Whereas an adoption counselor may have a relationship with an animal here at the shelter, they might not have any idea how they would behave in a home.”

Besides, the program provides the flexibility for on-the-spot adoptions. One brindle pit bull-type was adopted straight off busy Magazine Street in New Orleans. “A woman just stopped us and said, ‘I’ve been toying with the idea of adopting a dog, but I haven’t really been searching … but this dog just seems perfect for me, and it seems like she just found me,’” says Mayer. While Mayer ran to buy a new leash and collar, the adopter and adoption ambassador went to a nearby pizza restaurant and completed paperwork then
and there.

On the road again

Trusting fosters encourages them to get creative, like one couple at the LA/SPCA who specialized in adopting out large, pit bull-type dogs. “They were definitely our rock stars,” says Mayer. “As soon as they walked out of the shelter, their social media pages were just exploding with pictures of this dog.”

The couple would first take a new foster to Petco and create a video of him “picking out” toys and a bed. Mayer remembers images of “this little wiggly [pit bull-type], so excited to be picking out toys,” she says. “Every day of the week, they were taking [the dog] somewhere, posting pictures on Facebook and Instagram, like ‘Here’s the pup by the Mississippi River!’” Although the couple has since moved out of state, the shelter includes their phone number within its list of marketing ideas—just in case anyone needs a little inspiration.

Many organizations choose mostly dogs for the Adoption Ambassadors program—which is perhaps understandable, if you’ve ever tried to walk a nervous cat on a leash. But at Washington County, where cat intake is double that of dog intake, the Traveling Fosters program is almost all cats. One family, led by their son, has fostered hundreds of cats through the program over four years, says Taylor. The teen even helped write Washington County’s Traveling Fosters training manual.

“He wants my job,” laughs Taylor.

Roughly 25 traveling fosters (of around 400 total fosters) plan and hold near-weekly “gigs,” she says, including events at churches, car dealerships and ice cream shops. Much like roadies, volunteers receive a “traveling shelter,” including a foldable table, a comfortable cage that opens from all sides, a rolling file box, a Wi-Fi hotspot, a laptop, a credit card reader and access to the database system, as well as food, litter, bowls and calming spray.

Gigs are “casual and welcoming,” says Taylor, with cats in cages, on leashes and held in laps. Over two years, traveling fosters have placed 512 cats and eight dogs. Although some organizations have concerns about volunteers filing paperwork or taking fees, says Rogers at the ASPCA, Taylor has no qualms.

“I don’t understand why that seems to be an obstacle for so many organizations,” she says. “These are folks that give up their personal time. We trust them with animals, so I trust them with our shelter software. I trust them to collect funds. To me, the animals are more valuable than that.”

Her shelter’s live-release rate has gone from 29 percent to 81 percent in seven years after doing away with “unnecessary hoops,” says Taylor. “It’s interesting, when you loosen up, how much better things can get.”