Karina King, director of operations at the Dakin Humane Society in Massachusetts, has what you might call “a good problem.” In late October 2016, between the nonprofit’s two locations in Springfield and Leverett, she has only one dog available for adoption. Usually that number is closer to 10, she says, but even so—her shelter is one of the largest animal welfare agencies in New England.

“I could adopt out probably four times as many dogs and puppies as we do,” says King.

The “problem” is that New Englanders are both eager to adopt homeless animals and great at spaying and neutering their pets. Dakin runs a Humane Alliance spay/neuter clinic that has altered roughly 70,000 animals over the past seven years.

“We have people who are looking to do the right thing and adopt, and we want to support them in that, not drive them to backyard breeders or pet shops,” says King, noting that there are still pet stores in the state that sell puppies from breeding mills. But the shelter often has to turn families away because of a lack of available dogs who meet their criteria.

Yet King receives daily emails and voicemails from shelters across the country “where they are desperate, desperate for help,” she says. “We can help them. We can save those animals’ lives by doing a transport.”

By now, you know transporting pets across county or state (or international) lines—to places where Chihuahuas are in high demand and low supply or from warm-weather states where kittens abound year-round—can be a great way to bring needy animals to expectant adopters.

So long as shelters and rescues transport responsibly—ensuring the safety and well-being of animals and following state and federal animal transport laws—moving shelter animals from one region to another can be win-win problem sharing and solving. Currently, Dakin works with groups in Texas and New Jersey to transport animals into Massachusetts.

King is careful to point out that source and destination shelter partnerships are mutually beneficial—the “pull” of people who want to adopt and the shelters that want to support their communities’ desire to rescue pets, and the “push” of shelters with too many animals and too few adopters and resources.

“I’ve had a conversation with people at other shelters in New England that don’t import, and they’re like, ‘Our responsibility is our community’s animals,’ and I completely agree with that,” she says, and she won’t schedule transports if her shelter receives an unusually large influx of local animals. It’s just that those shelters are “defining ‘my community’ as ‘my city’ or ‘my county,’ but I don’t feel that that’s how I define my community. ... These sending shelters [that] don’t have live-release options for the healthy, friendly family dogs that they have—they’re my community as well.”

Since August 2016, the center has acted as a transport coordinator and way station for 23 source shelters to 27 destination shelters and counting, including Dakin. New Jersey is both a source and destination state, but dogs typically go from Southern to New England states, stopping at St. Hubert’s and then being distributed in a “hub-and-spoke” model. In 2016, the center’s goal was to facilitate transport of more than 3,000 dogs from all over the country and 1,200 cats from within New Jersey. 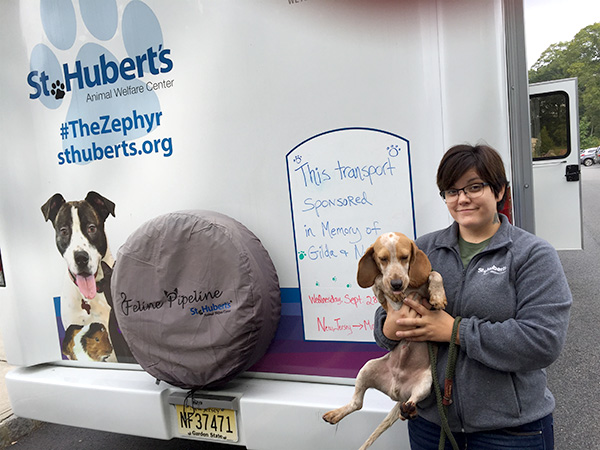 In the past, however, the reciprocal solution has been ripe for slip-ups and even scams, sometimes driving more restrictive pet import regulations in common destination states like Maine, Connecticut and Massachusetts.

Liam Hughes, director of Maine’s animal welfare program within its Department of Agriculture, explains that Hurricane Katrina in 2005—and the animals left behind—was the beginning of a pet transport explosion that highlighted the need for regulation.

He recalls rumors of rescue groups accidentally letting dogs loose at the interstate rest stop between Maine and New Hampshire. The state also received several complaints from New Englanders who unwittingly adopted sick dogs—it was impossible to track down the people behind the pets, Hughes says, and one theory is that people posing as rescue groups were selling unvetted dogs.

Rachael Fiske, assistant state veterinarian for Maine’s Division of Animal Health and Welfare, doesn’t lend much credence to the rumors, but calls Hurricane Katrina the “inciting incident” that led to increased pet transports into Maine. The Department of Agriculture issues import permits for all animals entering the state, but thanks to a former licensing exemption that gave rescues (legitimate or not) free rein, “it was still the Wild West when it came to getting [animals] adopted out,” says Hughes.

Shelters in the state “felt like they were being held to a different standard than a rescue that wasn’t a licensed brick-and-mortar shelter,” says Fiske. Humane agents were worried that if there was a disease outbreak, the lack of a paper trail would make it difficult to resolve the issue.

Maine’s animal transport laws changed in 2007, requiring additional immunizations and a holding period for transported animals before adoption or sale, and again in October 2015, requiring licenses for all rescues operating in the state. Each licensed rescue must keep animal records, spay and neuter animals and follow all disease protocols just like a brick-and-mortar shelter. Currently, the state has 77 of these licensed groups, most of which bring animals from the South to Maine.

Fiske acknowledges that for smaller rescues transporting into the state, the additional paperwork, vaccines, testing requirements and licensing fees can seem daunting. In fact, the most common complaint she receives from rescues concerns Maine’s requirement for heartworm, Lyme disease and ehrlichia tests in transported dogs. She often responds to such complaints personally. “It’s our job to prove that the licensing fee is used in a positive manner that positively affects them, as well,” she says. When shelters and rescues follow the rules, the animal population is “healthier overall,” plus licensing fees go toward animal welfare programs in the state.

“A lot of the rescue groups are more willing to call us, talk to us and ask us questions [now] because they know we’re not the big bad government trying to stop them from doing any work. We just want them to be responsible for the work that they are doing.” 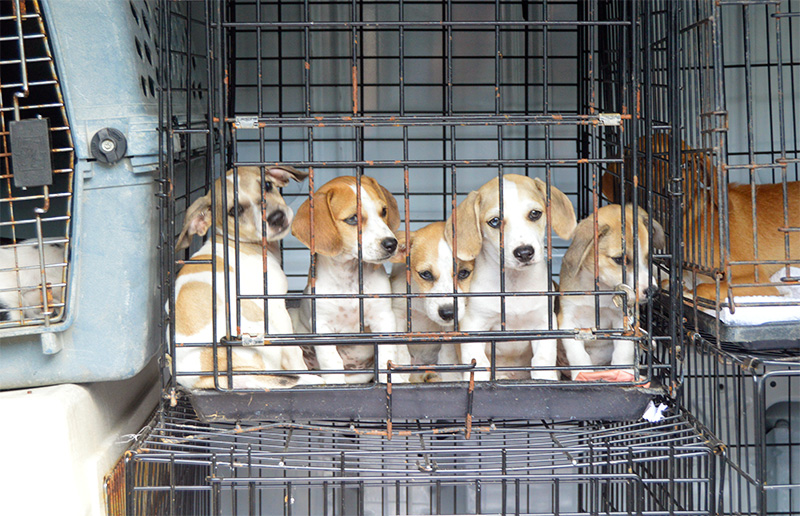 Although it helps weed out ill-intentioned or ill-prepared transporters, increased regulation can make pet transport tricky. According to Massachusetts law, transport animals must receive a health certificate before travel and, on arrival, be held in quarantine for 48 hours before receiving another health certificate. Per an emergency order issued during Hurricane Katrina, if a single animal shows signs of illness—anything from sneezing to hair loss—every animal on the transport must remain in quarantine for two weeks, drastically increasing each one’s length of stay, says King. When Dakin’s quarantine space is full, the shelter is forced to cancel subsequent transports, which is why, despite its successful transport partnerships, the shelter often finds itself short on adoptable dogs. Thanks to the stressful nature of transport, which can cause viral shedding, finding reliable sending shelters is especially important.

“What we have found is the single most important thing, aside from those basic health care requirements that we have, is that the sending shelter is able to pick the correct [animal] personality,” says King. Source shelters must choose the most happy-go-lucky dogs and confident cats, the type of pets who come off transport trucks “marching around and making biscuits,” because they’re less likely to fall ill.

Maine has a similar law, requiring a 48-hour holding period for transported animals older than 6 months. Any animals showing signs of illness—and any animals exposed to them—must be held for a longer quarantine period. Such laws increase length of stay, but they’re necessary, says Fiske.

“It’s a fairly broadly written rule, to some degree on purpose, because it’s really easy [when lawmaking] to paint yourself into a corner. Technology changes, and diseases of interest change, and areas where diseases didn’t used to be endemic but now are—that all changes,” she says.

Each state and country has its own animal import requirements, but Cammisa sends source shelters blanket one-page requirements based on the Society of Animal Welfare Administrators’ best practices for animal transport. King sends canine and feline transport contracts specific to Massachusetts and her shelter, outlining the required behavioral test, vaccines, heartworm and fecal tests, flea and deworming treatments, and health certificate.

“To begin with, people just thought you were stupid for even wanting to get [your pet] fixed. Now, we are having people call and say, ‘I would like to get my pet fixed.’”

The Dakin shelter provides spay/neuter, microchipping and additional health care, but most potential source shelters still find the requirements time- and resource-prohibitive. It’s a Goldilocks situation, says King—the “just right” shelter is one that’s overcrowded enough to benefit from transport, but that still has the time and resources to transport successfully.

Menifee County Animal Shelter in rural Frenchburg, Kentucky—population 500—transports roughly 500 animals a year, formerly through Rescue Waggin’ and now through St. Hubert’s. The shelter is able to adopt out fewer than 100 animals a year in its own community. Director Diana McGuire says too many people “do not alter their animals.” With a $28,000 annual county budget (supplemented by fundraising), meeting transport health requirements isn’t necessarily easy, she says, but the program is “a saving grace.”

St. Hubert’s sends $25 to $50 per dog back to Menifee; transporters send 10 percent of their fee, paid by St. Hubert’s, back to the shelter. If it can match the amount, Menifee also receives a small spay/neuter grant from the state Department of Agriculture every year. Gradually, McGuire has seen a shift in the number of surrendered animals—from over 1,000 to around 600 a year. “To begin with, people just thought you were stupid for even wanting to get [your pet] fixed,” she says. “Now, we are having people call and say, ‘I would like to get my pet fixed.’”

In many communities, availability of low-cost spay/neuter services, the strength of animal welfare laws (and funding for their enforcement), population density, economics and even climate can play a role in animal overpopulation—and for some organizations, it might be impossible to imagine ever being a destination shelter, says King.

Yet until recently, staffers at Dakin couldn’t imagine a life without too many kittens—then all of a sudden, there was a tipping point. Six years ago, the shelter transported around 300 cats to other organizations. In 2015, it served as the destination shelter for roughly 600 felines.

Cammisa calls St. Hubert’s transport partners like Dakin “sister shelters”—a phrase that evokes one animal welfare family, even when shelters are states apart. It’s a hopeful message for source shelters: One day, they might be on the receiving end of the transport.